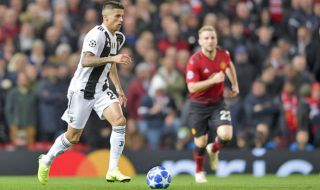 A report via Sky Sport Italia claims Joao Cancelo came up in discussions held between Manchester United and Juventus in London this week, with the Serie A champions working to re-sign France midfielder Paul Pogba.

Only recently, Sport Mediaset were claiming Cancelo was closing in on a £44m transfer to United’s bitter rivals Manchester City.

However, it could be United that have the upper hand over City, with Juve supposedly wanting to do another deal to take Pogba back to Turin.

Sky Sport Italia’s report also claims that City are cooling their interest in the 25-year-old defender.

The club may not want to sell Pogba but landing a full-back like Cancelo as part of the media would represent a decent move for both United and Juventus.

Juventus’s Sporting Director Fabio Paratici has travelled to the London offices of Manchester United for face-to-face talks over the potential transfer of Paul Pogba, according to Sky in Italy.

Cancelo is versatile enough to play full-back on both flanks – and it’s not as if United are blessed in either of those departments, despite Luke Shaw winning Manchester United POTY last term.

But he is primarily a right-back, so with Antonio Valencia’s contract expiring and Ashley Young kicking on, he would slot in nicely to Ole Gunnar Solskjaer’s starting eleven.

There’s still hope for young Diogo Dalot after his switch from FC Porto last year. He just needs to understand to be patient and wait for his opportunities to come.