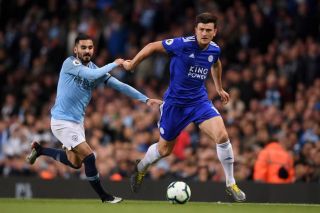 Manchester United are not put off by Leicester City’s crazy asking price for Harry Maguire.

A report by James Robson of the Evening Standard claims Ole Gunnar Solskjaer has already told Ed Woodward to make his move for the England defender, despite the Foxes demanding £90m for his signature.

That immediately sounds like an excessive amount for a defender, aged 26, who is nowhere near world-class.

If Solskjaer wants a top class central defender as part of his Old Trafford rebuild this summer, the Norwegian would be wise to spend his money elsewhere, as flogging a whopping £90m on Maguire would be sheer madness.

He’s good, but not that good!

This also comes down to whether or not Woodward and the Glazers plan to financially back Solskjaer in the transfer market.

José Mourinho considered a move for Maguire last year when Leicester’s valuation of £60-70m, as per the Evening Standard, was just as excessive. He’s not done enough in the past year to warrant a £20m increase, unless that’s the price of a new contract, which he agreed to sign last September.

Kalidou Koulibaly. Toby Alderweireld. Milan Skriniar. The list goes on… why are we still talking about Maguire?