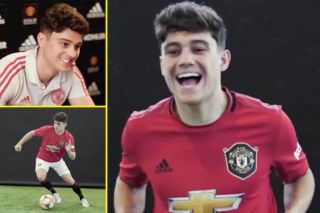 The Welsh winger notes that in a tweet and has thanked all of the United fans who sent messages yesterday following the news of his arrival.

Still, we have no real idea what sort of role James will play at United next season. The jump from Championship to Premier League may take time for him to adjust, and Ryan Giggs has already been giving the 21-year-old advice on expecting to be kicked more as a target in the top-flight.

With the likes of Giggsy close to James, he has the right people around him to hit the ground running at Old Trafford.

He seems a humble sort and I hope it stays that way.

Overwhelmed by all the messages the last 24 hours. Thank you so much for the amazing welcome. 👍🏼🔴 @ManUtd #MUFC pic.twitter.com/FbGIsrsz71