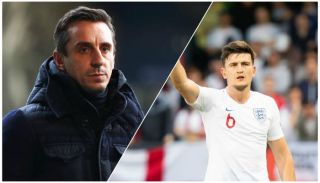 The latest on Harry Maguire comes from the Evening Standard. A report suggesting Leicester City have put a £90m price tag on the England defender’s head, and that Manchester United are not put off by it.

Straight away I’m dreading the thoughts of seeing that yellow news ticker scroll across my TV screen on Sky Sports News: ‘Manchester United have £90m bid accepted by Leicester City for Harry Maguire’.

If that happens, stop the world. I’m getting off!

However, Gary Neville doesn’t see it as bad idea like I do!

The former United captain says Maguire has all the attributes of a top defender and his ability on the ball is equal to Manchester City’s John Stones.

Maguire, 26, has been reported as a target for both Manchester clubs, so Leicester have a fight on their hands to keep the former Hull City defender.

“If you think of the attributes of centre-backs, he has them in abundance. Leicester fans won’t thank me for this, but they’re going to be under real pressure to keep him this summer,” he said on the Gary Neville podcast.

“We talk about John Stones being good on the ball, I actually think Maguire is the equal of him on the ball.

“A big statement, maybe, as Stones is seen as the composed, ball-playing centre-back, but I think Maguire is just as good on the ball.”

Make no mistake about it, United need a ball-playing centre-back who can start attacks from deep positions. That can only help the team going forward and Maguire does score a goal or two with his head from corners.

I just feel – with the £90m now being touted – the Reds should be looking elsewhere. A premium defender. Even Toby Alderweireld falls into that category before Maguire! 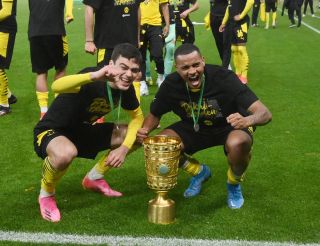