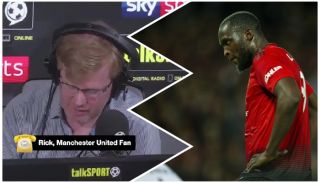 Someone alleging to be named Rick and a Manchester United fan claims Romelu Lukaku is possibly the worst footballer he’s ever seen play live.

That’s what talkSPORT listeners heard during a phone-in show on Wednesday night.

The host, in total disagreement with ‘Rick’, asks the caller to justify his questionable statement on Lukaku.

NEXT: Man Utd face missing out on £105m teenage sensation to Atletico Madrid

You get all sorts on these phone-in shows and many take the biscuit for what they think, in their own minds, is a moment of fame. But is it really worth when you’re talking complete rubbish?

Romelu Lukaku is not the greatest centre-forward the world has seen, but we’ve had many worse play for Manchester United. He doesn’t suit Ole Gunnar Solskjaer’s style of play and last season he dipped in form, but the former Chelsea and Everton striker had us on our feet during his first season at Old Trafford — especially when he was banging in goals for fun at the start.

He’s probably off this summer and few fans will lose sleep over it, but to even call Lukaku a terrible footballer seems harsh.

There’s no denying that Lukaku’s first touch is more often than not too heavy, though the rant below goes a bit over the top when you consider some of the other strikers we’ve had at United.

Let us know what you think of Rick’s assessment…

“Lukaku is quite possibly the worst footballer I have ever seen!” 😡

Rick the #MUFC fan rung up to blast Romelu Lukaku amid talk he’s off 🔥🔥 pic.twitter.com/kaLFEXu9gV

It’s worth noting that Lukaku scored a brace for this country this week. Not bad for Rick’s answer to the worst footballer he’s ever seen.