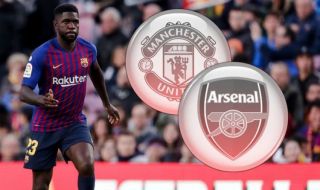 Manchester United have reportedly made an inquiry into the signing of Barcelona centre-back Samuel Umtiti.

The World Cup-winner was strongly linked as an option for the Red Devils last summer, though a deal never materialised and he stayed at Camp Nou, as reported at the time by The Metro.

Now a snippet from the print edition of Sport, as translated by Sport Witness, claims United have made an approach for Umtiti as his future could be in doubt if Barcelona win the race to sign Ajax skipper Matthijs de Ligt.

NEXT: Man Utd to make second bid for Wan-Bissaka

United have also been linked with De Ligt, but PSG look to have jumped ahead of them to sign the Dutch international, as per The Sun, and Barça are still in a strong position for his signature.

Umtiti when fit is one of the best defenders in Spain and would undoubtedly be an improvement on the defender options currently available to manager Ole Gunnar Solskjaer. He’s had his problems with injuries, but the Reds must soon find an answer to fix their defence.

While Arsenal have recently been linked with a move for Umtiti, as per the Daily Mail, Don Balon linked him with a £70m transfer to Serie A giants Juventus.

Solskjaer may consider a move for Umtiti if other defenders on United’s list prove too difficult to sign.

It’s not as if United would have a problem beating Arsenal in a bidding war.