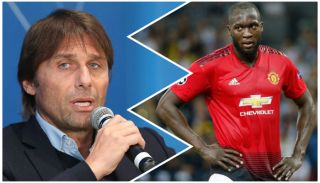 The transfer season is in full flow and we now have Romelu Lukaku talking up a move to Inter Milan.

It is expected that the Belgian striker will leave Old Trafford this summer and he is fully aware that the Serie A are interested in signing him.

Former Juventus and Chelsea manager Antonio Conte was recently named Inter boss, so Lukaku has gone all out to praise the Italian coach ahead of what now looks like a very likely transfer.

“It’s good to see Conte joined Inter, for me he is the best manager in the world,” Lukaku is quoted by Sportsmediaset, cited by MEN. “I’ve already taken a decision about the future but I can’t reveal it because I have a contract with United and because I respect the club.”

But Conte expressing an interest to sign Lukaku is nothing new. He tried to sign him whilst in charge at Stamford Bridge but settled for the underwhelming Alvaro Moratta when the Belgian decided to reunite with José Mourinho at United.

His form dipped last season but United still won’t be prepared to lose any money on Lukaku. At 26, his best years could still be ahead of him, so Inter could easily make profit on signing the striker.

Mauro Icardi’s time at Inter is all but over, though United appear to have no interest in signing the Argentine, as per The Metro, so we can rule out that possibility even though that’s who Lukaku is likely going to replace.