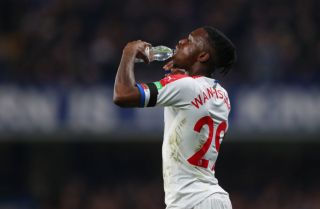 Late on Monday evening, speculation was rife that Manchester United were on the cusp of raising their initial bid for Crystal Palace’s young right-back Aaron Wan-Bissaka.

Sky Sports claimed that Palace rejected United’s initial advances, strongly rumoured to be a bid in the region of £40m. Tellingly, United have not been deterred by Palace’s staunch resistance and have actually been encouraged to place an improved bid.

It is well documented that United are on the hunt for a new right-back to compete with last summer’s signing Diogo Dalot. Antonio Valencia is moving on to pastures new, potentially with former colleague Wayne Rooney in the States and Ashley Young, well frankly is no longer up to it and his legs have caught up with him.

It is rumoured that United will lodge a second bid amounting to approximately £50m, which is sure to be a more tempting proposition for the men in suits at Selhurst Park. Wan-Bissaka has three years remaining on his current deal and Palace are neither under pressure to sell, nor is the player agitating for a move.

It means United will, in all likelihood, have to be resigned to the fact that they will have to pay over the odds to secure their primary targets, without the incentive of Champions League football to offer for the forthcoming season.

Supporters in some sections have questioned the logic in moving for Wan-Bissaka, when Dalot demonstrated considerable promise in his debut campaign in England. The truth is that Wan-Bissaka would be an upgrade and United should not really have any qualms about paying the asking price, as they could potentially get a decade of service out of Wan-Bissaka.

Manchester City changed the dynamic of transfer fees on full-backs when they splurged big money to sign Kyle Walker and Benjamin Mendy so, all things considered, Wan-Bissaka is not exactly going to be a rip off for United.

United need to signal their intent in the market, after a terrible campaign last year and already being linked with in excess of sixty odd players.

Wan-Bissaka would be another great addition in the young, hungry, British mould after the acquisition of Daniel James.