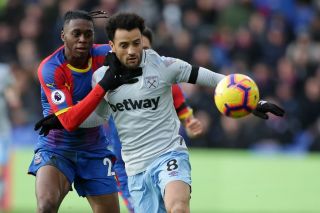 A report from The Times had suggested that United have had a £40m bid rejected for the Crystal Palace full-back, with the Eagles said to be demanding at least £65m for Wan-Bissaka’s signature.

It’s a lot of money for a young, unproven full-back but Ole Gunnar Solskjaer appears to be prioritising a move for the Palace ace over alternative right-backs.

Speaking on talkSPORT’s Alan Brazil Sports Breakfast programme, former England international Parlour felt the reported fee for the 21-year-old was “crazy”, considering he has yet to make a senior England appearances and his fee might go up again once he’s achieved that.

“It is madness, absolute madness,” Parlour said (H/t This Is Futbol). “I really like him, I think he’s an excellent player and I’ve seen him on quite a few occasions.

“His defending is very good and he gets forward. But for £65 million, it’s crazy.

“Look at those Ajax youngsters, they’re only young. They’ve not really done anything yet. They’ve really shown that they can play in an Ajax shirt and have done really well in the Champions League but they’re going for £70-80 million as well.”

Can’t disagree with Parlour here but from a United perspective, we’re in desperate need of a top right-back and Wan-Bissaka could be our prime option in that position for the next 10-years.

As Parlour says, there are Ajax players who could command such fees and they did more than the Palace defender in terms of winning trophies and reaching the Champions League semi-finals.

The other names United are linked with for right-back are less appealing, such as Kieran Trippier and Thomas Meunier. I’d have Wan-Bissaka over both players as he’s the future of English football and for that reason belongs at Old Trafford.