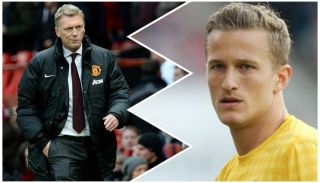 Former Manchester United goalkeeper Anders Lindegaard has given his thoughts on the club’s struggles since Sir Alex Ferguson’s retirement in 2013.

It’s been a difficult period but current manager Ole Gunnar Solskjaer is doing his utmost to turn things around to get United back where we belong.

Ferguson lifted 38 trophies during his 27-year spell and it’s six years since he called it a day.

United have had three permanent managers since then without a single league title.

David Moyes was the first man handed the keys to manage United after Fergie but was sacked after just 10 months in charge of the club. It was a disaster from start to finish.

Lindegaard, who spent 5-years at United, has opened up on just how tough life was at Old Trafford following Fergie’s exit.

In an interview with the Evening Standard, he said: “I didn’t feel it ageing. It felt more like we just couldn’t adjust to a new way of life.

“It seemed like trying to charge an iPhone with a Nokia charger. It just slowly went flat.

“Who was ever going to life the club after the boss? Moyes and everyone with big influence on United have all been easy targets.”

The goalie thinks the players must take responsibility for the club’s current situation.

He continued: “I refuse to be another one pointing at individuals.

“Every time the team has had a single bad result I’ve heard suggestions for new managers, getting rid of half the team and signing new players.

“I imagine it isn’t easy to work under those circumstances. I’ll point at myself and everyone else involved with United.

“Both on a professional and an emotional level. We were all to blame. None of us could accept changes to our beloved United.

“All of us though everything should just stay the same and we’d carry on succeeding. It was an illusion.”

I don’t think Lindegaard is just talking about the players was saw such an illusion. It seems – from the way the club is run – that they thought the transition to life without Fergie would be easy and ultimately underestimating the work he did as the manager throughout his successful career.