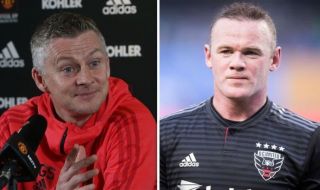 Wayne Rooney has urged Ole Gunnar Solskjaer to focus on building a long-term project rather than splashing the cash out on big-name marquee signings.

The Reds failed to secure a top-four finish in the Premier League last season, so attracting the best players will be difficult this summer. It means United are Europa League-bound next season and need to make lots of improvements if they’re to get back into the Champions League again.

Solskjaer has quite the task on his hands and if the final few months of last season told us anything about this current squad, it’s that the Norwegian coach has few players he can properly demand on. Somehow he must find a couple of stars in the making who will fight for the badge on their shirt.

Rooney doesn’t believe United should go for big-name signings. He has instead urged the club and its new manager, a former team-mate of his, to be patient and invest in building a youngster squad to compete for the long-term.

“For Ole, I think the first thing he’s got to do is try and build the squad,” Rooney told BBC Radio Five Live, as quoted by ESPN. “I don’t think bringing one or two players in for over £100m is going to really help with the squad and the players who are there.

“I think he needs to try and look at maybe five or six players who have got potential to be top players but you’re not spending £120m-£130m on these players.

“I think you spend £30m-£40m and then try to improve them, which will also give you longevity out of the players and allow you to build a squad around the five or six new players that come in, plus a few of the players who are still there.

“You could bring Ronaldo, Sergio Ramos and Messi in, or Gareth Bale for instance, and it’s going to cost you £300m-£350m which you’d get what? Maybe two years out of Ronaldo, a couple of years out of Ramos and then you’ve written that money off.”

We just want to see more effort put in by the players who wear the shirt after a number of embarrassing displays last term.

Lads like Marcus Rashford and Jesse Lingard, who should know what it means to play for United, really need to get their acts together.