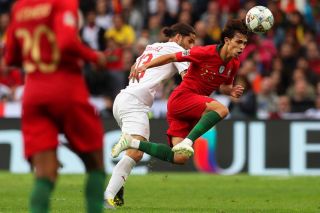 Manchester City have reportedly made the first move for Portuguese starlet Joao Felix.

Felix, also linked strongly with Manchester United, had an incredible breakthrough season in the Primeira Liga for Benfica, scoring 15 goals in 26 appearances. They even beat rivals FC Porto to the title.

In April, the forward became the youngest ever player to score a hat-trick in the Europa League when Benfica beat Eintracht Frankfurt.

According to Record in Portugal, cited by the Daily Mirror, City’s huge contract offer worth €30m over five years has put Benfica in a position where it will be impossible to keep the wonderkid at the club, despite being resigned to losing him this summer.

Benfica probably thought they could squeeze another year out of Felix, but not when several bigger clubs are chasing him down and offering ridiculous money for his signature.

It must be stressed that the report doesn’t state how much the transfer fee is on offer, or whether another club will attempt to make improvements to City’s wage package.

Although Felix is considered one of the most exciting prospects in football right now, United should look elsewhere to build the foundations of Ole Gunnar Solskjaer’s new side. Buying small and plentiful could put the Reds in a position to make signings like this in the future, though now United need to get back on track.

Felix did not feature in Portugal’s 1-0 victory over Netherlands in the Nations League final, but he made his senior international debut during their 3-1 semi-final win against Switzerland last week.