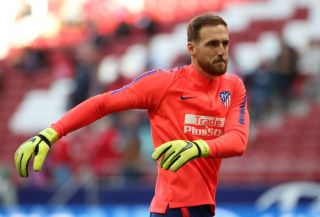 Atletico Madrid goalkeeper Jan Oblak wants to leave the Wanda Metropolitano Stadium and favours a move to his boyhood club Manchester United over Paris Saint-Germain, according to ESPN FC.

Dermot Corrigan of ESPN has picked up quite a scoop with this one and suggests the reason Oblak wants out of Atletico Madrid is because of broken promises over his future.

Like other top players, the Slovenia international wants to feel the club he plays for matches his ambition, though I’m not sure how wanting to join a side in the Europa League proves that…

Moreover, Ole Gunnar Solskjaer has a lot of work to do to this side and there’s also a chance David de Gea will leave at some stage in the near future. His contract expires next summer and United don’t see any closer to agreeing terms with the Spain no.1.

The Sun claims United are ready to hand De Gea £20m if he leaves for PSG now rather than wait until his current deal runs out next summer.

ESPN add that Oblak, 26, wants to play in the Premier League but earlier this year he signed a new deal until 2023 with Atleti. He was told then the squad would strengthen but now they’re on the verge of losing star player Antoine Griezmann, as reported by the Telegraph.

Oblak is arguably the best replacement out there for De Gea – conceding just 36 goals in 2018 – but Solskjaer knows he must also bolster United’s defence in order to build a successful team at Old Trafford.

There will be cheaper options out there. It just depends on how serious United want to take on-pitch matters going forward. Sadly, that hasn’t been a priority for some time.