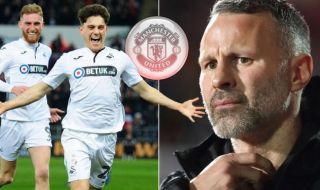 Ryan Giggs has issued a warning to Wales player Daniel James ahead of his move to Manchester United.

James, 21, is on the verge of a move to Old Trafford after United agreed a deal in principle to sign the Swansea City winger last week.

Now Giggs says James needs to get used to “getting kicked” when he becomes a top-flight player at United. The Wales manager would know all about that from his long successful career spent entirely at the Theatre of Dreams.

“With regards to being earmarked and getting kicked in games, that is something he is going to have to get used to. As a winger you know that defenders will try to stop you – fairly or unfairly.

“In Dan’s short career he has already come up against that and it is up it up to him to come up with a way to combat that.

“It’s a cat and mouse with the defender you are playing against. It always was for me.

“It depends on who you are up against, are they quick or are they slow, are they positionally good?

“You have to use your strengths. Dan is as quick as anything and that’s what the defenders are fearful of.

“If they drop off five or ten yards then you have to find other ways.

“He’s still early in his career but he’s done brilliantly. I thought he was fantastic the other day in what were difficult circumstances and he will keep on improving. I’m really pleased with him.”

Imagine Dan James reading the above…

One of his childhood heroes in Ryan Giggs, one of the most successful footballers to play the game, offering that level of praise and interest in bettering your career.

Should he listen and continue to develop, United could have a star on their hands.

First we wait and see how his first season in the top-flight goes. Playing for United is a gigantic jump from being with Swansea in the Championship.

United are also being linked with Wales international Gareth Bale. A loan move has been mooted by The Mirror.

Although that ship probably sailed long ago for the Real Madrid star.