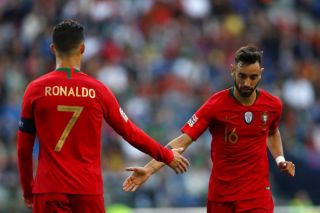 Sporting Lisbon and Portugal star Bruno Fernandes could be on his way to the Premier League soon.

Tottenham Hotspur were said to be leading the race for his signature, but Portuguese outlet Correio da Manha all of a sudden report that Liverpool could yet launch a bid for Fernandes in the near future.

Fernandes was brilliant in Portugal’s UEFA Nations League final victory over Netherlands on Sunday night, and United now appear back in pole position for the talented midfielder.

Director at Italian outlet Radio Rossenera, Pietro Balzano, claims an “agreement” between United and Sporting “has been reached”.

Fans were also told Fernandes is “very close” to joining the Red Devils.

An agreement with the club has been reached. They are supposedly working on the last details, one aspect being the commissions. Various clubs seem interested in the player, but for now ManUtd is very close to signing him.

From his performance against the Dutch, you can tell Fernandes has an eye for goal. He shoots whenever there’s an opening on goal and his efforts from distance are threatening for any goalkeeper.

This is a player I genuinely hope United sign this summer. Even better that we’d be rubbing Liverpool and Spurs’ noses in it by beating them to Fernandes’ signature.