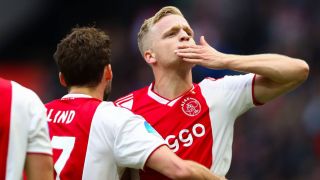 De Beek becomes the latest Ajax star to be linked with a big transfer this summer after a successful season for the Dutch side. The Eredivisie champions reached the Champions League semi-final but were beaten in dramatic by Spurs.

But now De Beek fancies something different, a step up in the football world. United may not be in the Champions League but he will know it doesn’t get much bigger than a transfer to Old Trafford.

However, if he’s sold on a move to a Premier League side with Champions League, Spurs have an instant advantage.

Talking to talkSPORT, van der Kraan says the 22-year-old is ready to move to England.

Another brilliant talent could be heading to the Premier League 🙌 pic.twitter.com/DhU2LvVAtQ

It goes without saying that Ole Gunnar Solskjaer needs midfield additions. The future of Paul Pogba remains unknown, Ander Herrera has left the club after his contract expired, and Nemanja Matic might not be part of the Norwegian’s plans for much longer.

United are also strongly linked with De Beek’s Ajax and Netherlands team-mate Matthijs de Ligt, but Cristiano Ronaldo made a move last night to try convince the centre-back to join Juventus instead, as reported by the Manchester Evening News.

This must be a difficult time for Ajax after finally building an incredible side again… only for it to be stripped almost immediately.

The Reds have also been linked with Ajax goalkeeper Andre Onana (via the Metro).