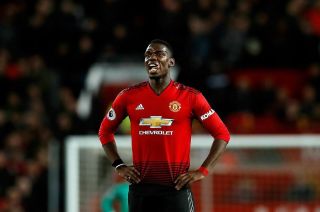 Manchester United may not want Paul Pogba to leave this summer, but reports suggest that the 20-times champions of England are drawing up a list of possible replacements for the French midfielder.

Pogba is being linked with moves to Real Madrid and Juventus this summer, although ESPN claims that United don’t think the Serie A giants will be able to afford the World Cup-winner.

He still ha two years left on his current contract at Old Trafford, so Ed Woodward is under no pressure to get rid, even though it feels certain now that Pogba would welcome a move to the Santiago Bernabeu over anything else.

But the Evening Standard suggest two potential targets United are looking at to replace Pogba.

Tottenham’s Christian Eriksen is one of the names listed and it looks a greater possibility with the Denmark international confirming this week he would like to “try something new,” as reported by Bleacher Report.

The other name is Youri Tielemans after the Belgium international spent half of last season on loan at Leicester City from AS Monaco. He had a really impressive short stint at the King Power Stadium and it wouldn’t surprise us if he joined a bigger club this summer.

According to the ES report above, United’s preference this summer would be to keep hold of Pogba. For him to remain an integral part of Ole Gunnar Solskjaer’s plans, which include buying two new midfielders to accommodate the Real Madrid target.