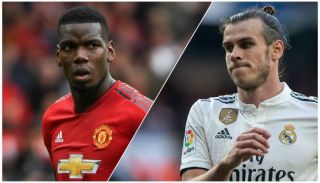 Zinedine Zidane wants Paul Pogba to be a key figure in his squad rebuild at Real Madrid.

The Spanish giants have already completed the signing of Eden Hazard on a five-year deal from Chelsea, as per CNN, and it is expecting that their attention will now turn to the Manchester United midfielder.

NEXT: Man Utd release 15 players in largest ever summer exodus

The Mirror claim that Real Madrid will offer winger Gareth Bale, who doesn’t appear to have the greatest of relationships with Zidane, in exchange for the French midfielder.

Bale was an unused sub in Los Blancos’ final game of the season — and didn’t even make their two previous match-day squads. It was thought from that moment that his time in Madrid was definitely up.

I never got the impression Bale got the credit he deserved at Madrid. For a player who has won four Champions League titles with the club, it’s never been a case of him being adored. Even Cristiano Ronaldo got sh*t from their fans…

But his troubles with injuries have had a negative impact on Bale and I don’t think United should fall into the trap of signing him this summer. He wouldn’t be as bad as Alexis Sanchez, but why can’t United go out and sign a younger alternative? The next big star rather than a 29-year-old, who has arguably seen his best years.

Bale is still better than a lot we have, but I like to think Ole Gunnar Solskjaer will stick to his long-term approach of buying younger players. I’m already excited about the capture of Daniel James from Swansea City, which is set to be officially announced next week.

Of course, James and Bale could be good team-mates with both players in the Wales national team together under Ryan Giggs.