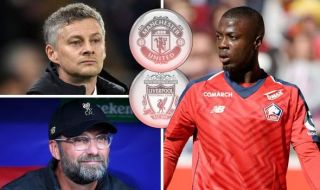 It looks like Lille star Nicholas Pepe is set to shun Premier League interest to sign for Bayern Munich instead, as reported by The Sun.

The Ivory Coast international has reportedly caught the eye of Manchester United and Liverpool after an excellent season in Ligue 1.

Stories have linked him with a move to Old Trafford as Ole Gunnar Solskjaer looks for a right winger to bolster United’s attack.

The past season he scored 22 goals and provided 11 assists for Lille as they finished runners-up to champions PSG.

His form, though, that has attracted interest from a number of clubs, has seemingly earned Pepe a move to the Bundesliga champions.

Lille chairman Gerard Lopez had already admitted defeat in his attempts to keep Pepe at the club, earlier this year: “It is certain, he will leave. He has moved into a price range that we can not afford anymore. There is a career choice to make for him, I think he will have the choice.”

The Red Devils have been linked with a host of wingers including Jadon Sancho and Steven Bergwijn, but we are also expecting Daniel James to be announced as a new signing next week also.

For too long now United have primarily attacked from the left flank because we’ve had little to no pace on the opposite side. And next season it’s equally important that Anthony Martial improves and shows more consistency!