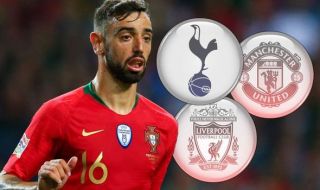 Sporting Lisbon midfielder Bruno Fernandes is attracting lots of attention this summer, with both Manchester clubs heavily linked with the Portugal international.

Even Liverpool have reportedly joined the race to sign Fernandes, with Sky Sports citing newspaper reports, and Tottenham Hotspur are another Premier League hitting the gossip columns while The Express claims he will snub both United and Liverpool for White Hart Lane.

But there’s another twist to the Fernandes saga, and it hint at one of the other potential suitors jumping ahead in the race to sign Sporting’s star player.

BBC Sports presenter Richard Askam claims City have had second thoughts about making a move for Fernandes and no longer feel he would be the right fit for Pep Guardiola’s side (see tweet below).

Interesting Manchester City appear to have had second thoughts about Bruno Fernandes. Senior figures have watched him closely. Not quite the right fit it would seem #mcfc #mufc #lfc #thfc

United have reportedly been tracking Fernandes for months now, and you’d think he would have been on José Mourinho’s radar too, being an established Portugal international.

Portugal will take on the Netherlands in the UEFA Nations League final after beating Switzerland in the semi-finals. The Dutch knocked out England 3-1 after extra-time.