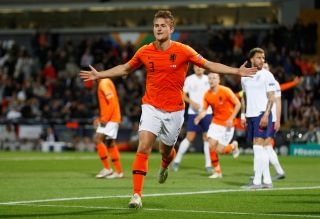 The saga surrounding Matthijs de Ligt’s potential transfer this summer is non-stop. The Ajax skipper spoke to the press after Netherlands beat England 3-1 in the UEFA Nations League semi-final.

De Ligt didn’t have the greatest of starts against the Three Lions as he took Marcus Rashford down inside the box and gave away a penalty, which eventually put the Dutch a goal behind.

But it was the Ajax starlet who headed home the equaliser as the Netherlands came from behind and forced extra-time before winning the game 3-1.

They now face Portugal in the final, but De Ligt still has his future to think about…

“Obviously the Premier League is a great competition, but I haven’t made up my mind yet,” the defender told talkSPORT in Portugal.

De Ligt can pick from the best of clubs around Europe this summer, with his performances last season sending shockwaves throughout the football world.

Manchester United are among those, as per The Mirror, but Liverpool and Man City are rumoured to be the Premier League clubs interested.

The latest from The Metro suggests that United have pulled out of the race to sign De Ligt, but Liverpool remain hopeful of securing his signature this summer.

The Netherlands international would be the perfect signing for United though, with his ability to lead from the back as well as his winning mentality which becomes even more evident with his leadership qualities.

At the moment, United haven’t got a leader or a top class centre-back. This 19-year-old is the entire package – destined for Old Trafford – but ESPN claims that the Red Devils think he’s Barcelona bound.