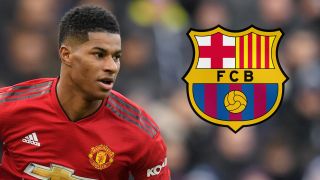 Barcelona are interested in signing Marcus Rashford this summer, according to Spanish newspaper Sport.

Ernesto Valverde is said to be on the lookout for someone to complement Lionel Messi and Luis Suarez, but at the same time he probably wants a long-term replacement for when Suarez leaves or retires.

The report claims that Barça have already been in contact with United over a move, with club president Joseph Maria Bartomeu and Ed Woodward said to have good relations, but there is no suggestion at al that the Red Devils will cash in on the England international.

It would be madness to get rid of Rashford anyway. Next season he needs to step up and become a more prolific striker, scoring closer to 20+ goals per season. That’s when United will be able to rely on Rashy – but we’re now at a crossroads and may need to sign another striker this summer if Romelu Lukaku leaves.

Rashford earned and scored a penalty last night as England crashed out of the UEFA Nations League. It all went pair-shaped for Gareth Southgate’s men after scoring the opener. The Three Lions went on to lose 3-1 in extra-time, with the Netherlands qualifying for the final against Portugal.