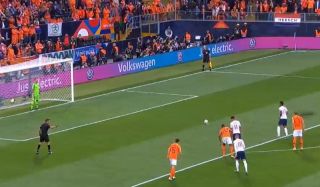 Marcus Rashford capitalised on some shoddy defending from Netherlands centre-back Matthijs de Ligt before earning and scoring a penalty to put England ahead in the UEFA Nations League semi-finals.

Rashford showed his class again which makes you wonder if criticisms of the United forward are harsh. He’s 21-years-old and is still developing… the Whythenshawe lad is a frightening prospect.

The same can be said about De Ligt, 19, who makes a costly mistake here, but it’s still no wonder why so many top clubs are linked with signing him this summer, including United.

Rashford makes no mistake from the spot after winning the penalty from a De Ligt foul, as seen in the video below.

It’s a poor challenge from De Ligt and England capitalise!

Rashford has England in front!

Portugal have already booked their place in the UEFA Nations League final. Gareth Southgate’s Three Lions will be hoping to join them by winning tonight.

Elimination for the Dutch could send the De Ligt saga into overdrive and potentially speed up the process of his destined transfer.