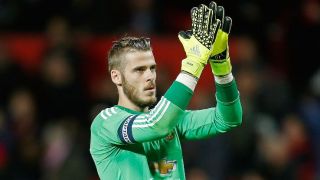 Buffon spent a season at PSG after an incredibly successful career between the sticks for Serie A outfit Juventus. The Godfather of goalkeepers.

NEXT: Man Utd to reject all approaches made for Paul Pogba, blow for Real Madrid and Juventus

Only certain keepers can replace Buffon and De Gea is one of the best in the business. He had his blip moments last season, but form is temporally and class is permanent. The former Atletico Madrid goalie hasn’t lost it all over night.

But a problem lies with De Gea’s contract which expires a year on from now, when he will then be allowed to leave Old Trafford on a Bosman.

If he’s no closer to agreeing on a new deal, as reported by ESPN, United need to consider their options by seeing how much they can get for the Spanish no.1 this summer.

We would obviously prefer to keep hold of De Gea for the long-term future, but the signs that he wants to be here are not evident.

If Dave moves on he will still be remembered as a brilliant servant to the club. It’s a shame he hasn’t won more during his time at Old Trafford.