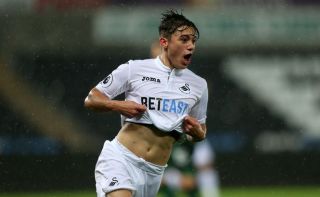 It looks like the Swansea and Wales winger will soon become Ole Gunnar Solskjaer’s first signing as Manchester United manager, according to reports.

It is reported by Manchester Evening News that a £15m proposed transfer to Old Trafford is close to being completed.

The MEN adds that James’ medical will take place on Thursday (today), so the club shouldn’t take long to announce their new summer signing, especially with personal terms agreed on a month ago.

NEXT: Man Utd not worried about Pogba to Juventus speculation

Whether or not James comes in and starts games immediately remains to be seen, but at 21 he’s got plenty of time to make this big move a success.

He’s quick and nimble which means United will be better on the counter-attack with him in the team. That should make tactical improvements on opting for Juan Mata and Jesse Lingard, who have both been makeshift options on the right flank, not necessarily blessed with pace.

It’s definitely a promising addition to the team, but it’s just difficult to make out how big of a club this will be for James and how long it will take him to adjust to top flight football.

Solskjaer has obviously called Wales manager and former team-mate Ryan Giggs to gather some insight into James, though he clearly backs to player to make a difference at United.