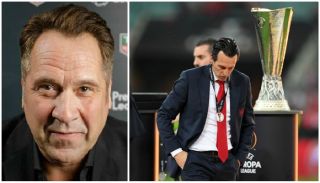 Arsenal and Manchester United both had similarly disappointing seasons and this summer are being linked with similar players, so David Seaman has given his verdict on what he thinks will happen.

Seaman was a member of some fantastic Arsenal teams and they engaged in the fiercest of battles with United down the years. Key players like Roy Keane and Patrick Vieira, Ruud van Nistelrooy and Martin Keown — the list goes on, but they made no secret about not liking one another.

NEXT: Man Utd to reject all approaches made for Paul Pogba, blow for Real Madrid and Juventus

For me growing up, those were the most memorable moments of my childhood. Season after season we would be head-to-head with the Gunners going for the Premier League title.

Nowadays it’s very different and neither Arsenal or United look like competing for the league title.

Seaman draws similarities between the both clubs trying to sign players without Champions League football on offer.

“When you look at Arsenal, they’re in a very similar situation to United,” Seaman told talkSPORT.

“They need to strengthen at the back, they’re both without Champions League football, so it’s going to be testing times.

“I would say United [are in a better place than Arsenal] because of their buying power and the money they will pay for players. That [Arsenal’s transfer budget] is so frustrating at Arsenal because the club is running on a good profit.

“The fans are so frustrated at the moment, especially with the result in the Europa League final against Chelsea.

“I watched it and it was a disappointing result. IIt was made a little bit better by the weekend result [Tottenham being beaten by Liverpool in the Champions League final], but it’s so disappointing.

“They’re struggling. It’s just so frustrating being an Arsenal fan and an ex-Arsenal player at the moment. You know what the club is capable of, so you’re just like, ‘come on, let’s see what you’ve got’.”

Arsenal lost the Europa League final to Chelsea a week ago, which killed any chance they had of playing in the Champions League. A win would have been enough to qualify Unai Emery’s side for next season’s competition.

Instead both clubs under question will play Europa League when the football season gets back underway. Trips to the middle of nowhere but they will be the ones you’ll remember forever.