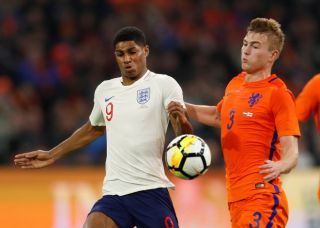 Manchester United continue to be linked with a move for Ajax skipper Matthijs de Ligt.

Although, according to Duncan Castles, as per the Daily Star, United have accepted that a deal for the centre-back isn’t going to happen.

With that in mind, it’s best we all forget about signing De Ligt, the 19-year-old who looks set to become the world’s best defender for years.

NEXT: Man Utd must engage in transfer tug of war to land €120m-rated youngster, tipped as Portugal’s future star after Cristiano Ronaldo

But it doesn’t help when Marcus Rashford is away on international duty admitting he’s a fan of the defender.

England take on the Netherlands in the semi-final of the UEFA Nations League on Thursday night.

‘De Ligt and Virgil are probably the best centre-backs in the world right now,’ Rashford said, as quoted by the Manchester Evening News.

‘We know how they defend. They like to be up [close] and behind you.

‘We want to get them facing their own goal. We have the players to do it. Pretty much every forward can do that, that’s what our game is about. If we can do that we know we can cause them problems.’

United are absolutely shocking at the back and unless they address that problem this summer, Ole Gunnar Solskjaer is in for a rough campaign when the football returns.

De Ligt would have been the perfect signing for United. Ready to start games, leadership qualities, and the type of player you can build the defence around.

Ajax had a great season – reaching the semi-finals of the Champions League – and were bound to lose some of their greatest players this season as a result.

Whoever gets De Ligt will be signing a top player, for now and for the future.