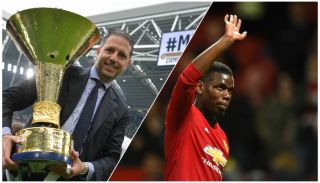 Juventus sporting director, Fabio Paratici, insists the Italian club will not pursue transfer targets this summer until a new manager is in place.

It makes perfect sense to have a manager installed before spending millions beyond millions on new players, when those new signings may not fit the plans of the new boss.

The Serie A champions have been linked with a move for Paul Pogba, who they sold back to Manchester United in 2016, and now the midfielder’s future at Old Trafford is up in the air.

Pogba spent six years at Juve winning four league titles and the Coppa Italia twice. It was a successful stint in his career and now as a World Cup winner, he probably wants to move on to somewhere where trophies are more likely.

Juve win the league every year and, with Cristiano Ronaldo now at the club, should be pushing closer towards European glory. They could enhance that by adding Pogba to the mix.

Federico Chiesa, the Fiorentina winger, is another name linked with a move to the Old Lady.

But Paratici insists that his club’s transfer business is on hold until a new manager is appointed.

“Federico Chiesa? We certainly have a competitive team,” Paratici told a Football Leader 2019 event, as per Manchester Evening News. “As far as the market is concerned, we await the name of the coach.

“We will make the necessary assessments after announcing it. Pogba? The same, we’ll speak with the new coach.”

A new manager is not going to say no to signing Pogba, unless it’s José Mourinho, who we already know has a pretty bad relationship with Juventus.

Real Madrid is another potential destination for Pogba, with The Express suggesting that United are readying plans for life without the Frenchman.