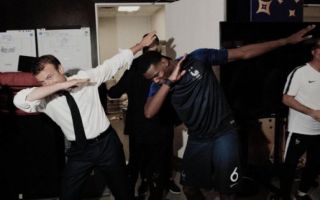 The French President, Emmanuel Macron, rewarded the national team the Legion of Honour for winning the 2018 World Cup.

It was another proud moment for Manchester United midfielder Paul Pogba, who President Macron described as the ‘calmest’ member of the France national team.

France beat Croatia 4-2 in Moscow, with Pogba scoring the third goal for Les Bleus, as they became world champions for the second time a year ago.

Mr. Macron said Pogba was ‘without doubt the calmest member of the team’, as per Manchester Evening News.

Pogba shared his moment with Mr. Macron on Twitter, as seen below.

The midfielder’s future is still up in the air, with The Guardian now reporting that Juventus have made United aware that they want him back.

Another saga involving Pogba doesn’t seem far off. No doubt he will remain ‘calm’ throughout…