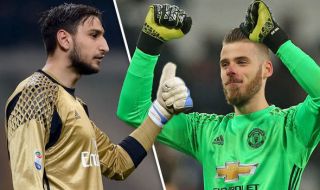 Manchester United are said to be ‘seriously thinking’ about making a move for AC Milan goalkeeper Gianluigi Donnarumma.

It’s probably time to consider options for David de Gea’s replacement, with doubts over his future still the subject of many gossip columns.

Donnarumma, 20, is the second shot-stopper to be strongly linked with the Red Devils this week. Journalist Duncan Castles claims United have been quoted a transfer fee of €35m for Lille’s Mike Maignan, as per the Daily Record, so there is enough to suggest the club is preparing for life without De Gea.

Despite his young age, Donnarumma has racked up 164 appearances for the Rossoneri and Italy will be set for years if he reaches his full potential.

Whether he stays loyal to AC Milan or looks to move on at some point remains to be seen though, as Calciomercato report, via the newspaper edition of Corriere della Sera, that United will step up their pursuit and table a €60m offer to prize the goalie away from San Siro.

Meanwhile, The Mirror continues to link De Gea with a move to Real Madrid. Zinedine Zidane certainly doesn’t seem to be a fan of Thibaut Courtois, leaving him out of several games after returning to the club as manager towards the end of last season.

Like United, AC Milan failed to qualify for the Champions League, so it’s not as if Donnarumma would be dropping down a level to the Europa League.

The Reds should be aiming to be back in Europe’s biggest competition a year on from now. No excuses with the power United has as a football club.

While losing De Gea would be a huge blow for the Reds, signing Donnarumma should keep United safe between the sticks long-term. We would need to be patient and allow the Italian to grow into the role as our no.1, but as we seen with De Gea many moons ago, it could be worthwhile.