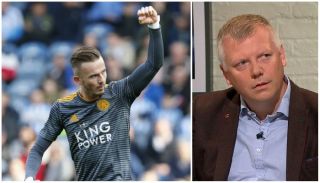 John Cross says that clubs chasing Leicester City playmaker James Maddison must be prepared to spend a “hell of a lot” in order to secure his signature this summer.

Manchester United became a possible destination for the 22-year-old on Monday when a report from Duncan Castles was published by the Daily Record suggesting that the Red Devils had reached out to Maddison’s representatives.

The Independent then went a step further with claims United are in pole position – ahead of Tottenham – in the race to snap cup the Leicester man.

Maddison is the type of player United should be targeting too, especially when you reflect back on the lack of creativity that comes from midfield, even when Paul Pogba is playing most weeks. Solskjaer needs to find the right mix of players to build a midfield around and perhaps he thinks Maddison is the right man for the role.

Speaking to talkSPORT, the chief editor of the Daily Mirror said that should clubs maintain their reported interest in Maddison, they will have to spend big.

“He finished the season in magnificent fashion with Leicester,” said Cross, as quoted by This Is Futbol.“I think he’s proving what a fabulous player he is. I think he’ll benefit from working under Brendan Rodgers, who’s great at nurturing young players.

“I tend to think Leicester will dig their heels in, because if there’s one player to go, maybe that might be Harry Maguire. I think it would take a huge offer and I’m not sure that Leicester are a club that need to sell.

“I think there’ll be a lot of clubs looking at Maddison, and I know for a fact that Leicester are absolutely determined to keep him, so I don’t know what price Leicester might be tempted.

“But I think it would take a hell of a lot, because this is a super player. There’s so much growth in him yet, he’s got eyes in the back of his head when it comes to seeing passes and he’s a really exceptional talent.”

While most of the people reading this will want to see United get the best deal possible, hoping that Cross is wrong, but he is bang on the money (pardon the pun!). Maddison is a fine prospect with both Premier League and international experience in his locker.

He’s also got time on his side to get even better, which is what probably appeals most to United manager Ole Gunnar Solskjaer.

One of the problems United could face trying to get Maddison stems with Brendan Rodgers. The former Liverpool boss is trying to build something at Leicester and he will do his best to convince his best players to stay to become part of it.