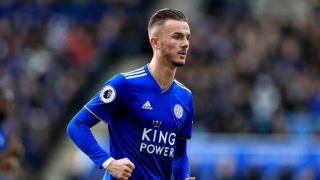 The word of Guardian journalist Jacob Steinberg is that Leicester City playmaker James Maddison is not looking to leave the Premier League club but there is definite interest from Manchester United and other top clubs.

Maddison’s breakthrough season only came last term, so he’s not going to be pushing his weight around in a disrespecting manner towards his current employees. He may still want the move to United if it materialises but our interest was only reported on Monday via Daily Record.

Steinberg doesn’t only mention United but added City, Tottenham and Liverpool to the list of potential destinations for the Englishman. He rules Arsenal out because of the £60m price tag put on Maddison’s head.

The Guardian journalist adds that he thinks Maddison should avoid United because Leicester are apparently likely to finish above us next season.

If I was James Maddison, and I’m not, I’d steer clear of United, wait for better offers. It’s really not hard to see Leicester finishing above them next season. Plus he’s only been in the PL a year – needs to pick his next move carefully.

This saga could drag on a while with all of the top Premier League clubs said to be interested in Maddison’s signature.

We’ll just have to sit tight and see what happens.