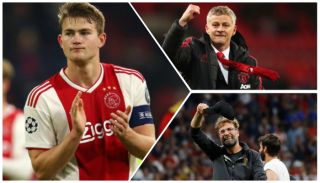 He’s been strongly linked with both Manchester United and Barcelona, but now the European Champions could enter the frame and proposal the opportunity to play alongside fellow Dutchman Virgil van Dijk every week.

There is a feeling in the Netherlands that De Ligt would be perfectly suited to the Premier League and that the move would benefit his game given the traits he will learn in England’s top flight.

Bild’s report on Liverpool moving in for De Ligt was shared by Jan Aage Fjortoft on Twitter.

Bild reporting that «de Ligt could be Klopp’s next triumph”

Will Man UTD lose the player to Liverpool? pic.twitter.com/URt3Y8zaZ1

Only time will tell but if Liverpool are trying to edge their way in now, knowing United are willing to outspend Barcelona, it could mean a bidding war is about to commence.

That said, I don’t see Liverpool outspending United. It also depends on what route De Ligt wants to go down with his next club.

The Scousers never looked back from the moment they splashed out £75m to sign Van Dijk from Southampton, as reported by BBC Sport.