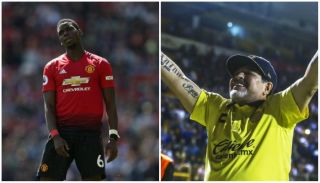 The Manchester United midfielder is often subject to criticism, partly because his performances since returning to the club in 2016 have been underwhelming. We see glimpses of brilliance and hear about how he won the World Cup last year, but nothing like what we supposed to get after breaking the club’s transfer record to sign him from Juventus.

And in the last hour, The Guardian claims Juventus have made United aware that they want to bring Pogba back to Turin.

NEXT: Diego Maradona backs himself to become next Man Utd manager

The Frenchman splits opinion. Everyone can see his incredible ability, but does Pogba work hard enough?

The above quote says a lot about what Maradona looks for in a player, someone who is going to work their socks off for the team, and his criticism of Pogba may seem harsh but it’s not wrong either.

This United side has been crying out for a leader for some time and most of us hoped Pogba would take on the responsibility. The videos of his team talks at the World Cup last summer showed captain’s instinct, but when it comes to the Red Devils he just seems disinterested.

It’s hard to watch because Pogba has what it takes — ability wise — to be the best midfielder in the world.