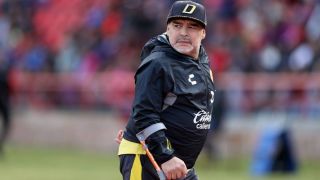 Ole Gunnar Solskjaer only recently got the Manchester United job on a three-year deal but in case he faces the ace anytime soon, Diego Maradona has let the world know he is ready to take the reins at Old Trafford.

Not that anyone wants that, I should hope.

Maradona may be the greatest footballer of all-time, depending on your preference, but the same cannot be said about him as a manager.

In an interview with FourFourTwo, Maradona put himself in line for the United job should it become available again.

“If Manchester [United] need a coach, I’m the man to do it. I know they sell lots of shirts around the world, but they need to win trophies, too. I can do that for them.”

The Argentina legend is not short on confidence anyway, but he also admitted to cheering for the reds in the past.

“Manchester United used to be my favourite English team for so long. So many great players and a great team under Alex Ferguson. But now I have to say Man City. I know you shouldn’t change like that but it’s because of Kun [Aguero – his former son-in-law]. We speak a lot and he plays in a very good team.”

Maradona currently coaches Dorados in Mexico, so it would be quite a big step up to suddenly start managing United.

Though the same could be said last year if you told someone Solskjaer would replace José Mourinho in mid-December.

It would probably grant Marcos Rojo a greater chance of starting games, or maybe even second choice goalkeeper Sergio Romero.

His greatest achievement as a manager to date was with Argentina at the World Cup in 2010, when they reached the quarter-finals, so I don’t know why he’s so sure about delivering trophies at United.