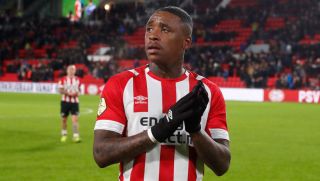 Steven Bergwijn’s agent says he hopes his client moves to Serie A this summer.

The PSV Eindhoven winger has been linked with a move to Manchester United, with the Reds now unlikely to land Borussia Dortmund sensation Jadon Sancho due to not qualifying for the Champions League.

Bergwijn could be a cheaper alternative to the England international and his 13 assists (via Fox Sports) in the Eredivisie suggest he could be a bargain signing for the alleged €30m price tag, as reported by Transfermarkt.

Inter Milan are also said to be interested in signing the 21-year-old, but agent Fulco van Kooperen says Italy would be his preferred destination for the Netherlands international.

“Bergwijn at Inter or in Italy? That’s what I hope,” said Bergwijn’s agent, as quoted by the Manchester Evening News. “The market has just begun, he might go to Italy but at the moment there is still nothing concrete.

“With Ausilio and Marotta no need contacts are scheduled at the moment, but there is time to talk about it. Antonio Conte? I don’t think that with the new coach he can change anything for the purpose of his eventual arrival in Milan”

There’s nothing concrete on United’s interest, but we did run a piece yesterday suggesting a move for Bergwijn could represent a bargain deal for the Reds.

Manager Ole Gunnar Solskjaer could do with a speedy winger on the right with the ability to create goals. Instead of sticking by Jesse Lingard and Juan Mata, with neither possessing a lot of pace, the club should prioritise a right-sided attacker.

Inter are leaving signs that they will back Conte in the transfer market. Romelu Lukaku is being heavily linked with a move to the San Siro, though The Sun claims FFP could rule out a possible transfer for the Serie A giants.