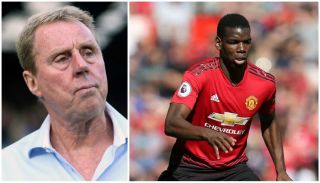 Ole Gunnar Solskjaer should centre his Manchester United rebuild around Paul Pogba, according to Harry Redknapp.

While the French midfielder is said to be keen on a move to Real Madrid this summer, as per the Daily Mail, with claims the Spanish giants are willing to offer three players in exchange: Gareth Bale, James Rodriquez and Isco.

It seems ridiculous for the former West Ham and Tottenham manager to come out and even suggest this as a good idea when it’s been heavily reported that Pogba wants a summer transfer.

“He’s a real talent,” Redknapp told the Manchester Evening News. “I think the boy’s a real good player but he needs the right players with him and he needs to know what his role is in the team.

“If you’ve got a player with his talent, you have to build the team a little bit around him by making sure you’ve got the right people around him to get the best out of him.”

Pogba’s attitude hasn’t always been in check since his United return in 2016 as he’s been one of the players questioned over downing his tools whenever the going gets tough.

But Redknapp does not believe Pogba is having a bad influence on the United squad.

“I don’t know him but people tell me he’s a good lad,” Redknapp continued.

“I know he comes over a bit, you know, big-time, but people say he’s a good guy. And he certainly is a talent.

“You saw that a Juventus. He played in a World Cup-winning team. I think they’ve got to get the best out of him.

“It’s up to Man United now to bring the right players in to play with him and to make sure he’s on board.”

Redknapp appears to miss the point that few people believe Pogba has any interest in staying at United beyond this season. Stretty News has learned that although the Frenchman enjoys playing under Ole Gunnar Solskjaer, the opportunity to join Zinedine Zidane at the Bernabeu is considered too appealing.

Nobody can deny his quality as a football, but Pogba is nowhere near consistent enough.

Maybe Redknapp is right that with the right players around him he will get better. That said, United have already signed players to accommodate Pogba – such as Nemanja Matic – and the same complaints are being muttered.

So, must we really bend over backwards for a player who is dreamy about joining another club?