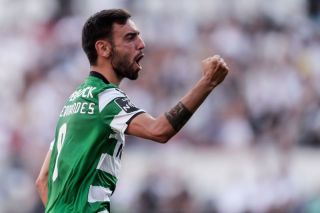 Sporting Lisbon midfielder Bruno Fernandes has been a regular in the Manchester United gossip columns this summer.

At the age of 23, Fernandes has already played in five different teams, and this summer he may be on the move again.

This season his skills have been compared to those of Portuguese legend Rui Costa – ball handling, game vision, shooting from distance and the ability to dictate the tempo of a game – but he dismissed those and unfair, as per Marca.

United could do with a player like Fernandes, especially if Real Madrid finally secure a deal to sign Paul Pogba. Ole Gunnar Solskjaer cannot lose the Frenchman and not replace him with creativity in midfield.

And, even with Pogba, you couldn’t say United created anywhere near enough in previous seasons.

“City are a team who are winning everything in England in recent years. United are one of the teams with more history. Each in its own way has its own importance and strengths. Obviously they are two clubs that any player would like to represent.”

Fernandes is really opening himself up to a Premier League transfer with those quotes.

He’s making plenty of noise about his future, which is understandable for a young player readying himself for a big step up from his current surroundings at Lisbon, and a recent report from A Bola claims he could cost around £70m.

Let’s wait and see what happens over the coming weeks.