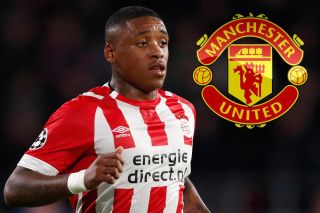 Transfer speculation linking Steven Bergwijn with a move to Manchester United has resurfaced.

There was talk of interest in the Netherlands winger some months ago, as well as the feeling we couldn’t go the entire summer without being linked with the PSV Eindhoven star.

The Sun claims Ole Gunnar Solskjaer wants to make a move for Bergwijn, who scored 14 goals for PSV in 32 appearances in the league last season.

Moreover, Bergwijn’s agent was asked about his client’s future after reports linked him with transfers to either United or Liverpool, as per talkSPORT.

“If you are selling a house, I don’t think you say no to a buyer in advance.” Bergwijn’s agent Fulco van Kooperen told Eindhovens Dagblad, as cited by InsideFutbol.

“It is not the case that PSV will determine where Steven will be going this summer. He will choose the club if he wants a transfer.

“PSV will have to find an agreement with the club where Steven would like to go.”

It’s clear from those quotes that Bergwijn is trying to engineer a move out of PSV, so it makes perfect sense for him to be linked with United and the current Champions League winners.

United need to find a system that works in attack – and hopefully that means Solskjaer will try to feed his front men with lots of service from out wide, similarly to how the Reds played during the good old days.

The Norwegian needs to find a mix of youthfulness and experience.

Bergwijn is 21-year-old and came through the Ajax youth system before joining PSV in 2011. He has represented the Netherlands at all levels from U17s up, including the senior side.