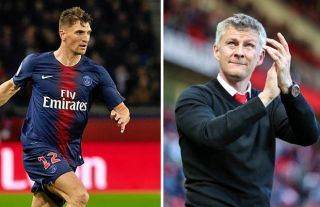 La Dernière Heure suggests that the Reds are readying a bid worth €25m and the club want it finalised quickly, probably because Arsenal are also believed to be interested in Meunier, but he would reportedly prefer a move to Old Trafford because he’s a United fan, as reported by The Sun.

NEXT: Ajax starlet announces he has joined Man Utd with Instagram video

Ole Gunnar Solskjaer should definitely look to sign a top-class right-back this summer to help sure up United’s defence, but also a player who can get forward and cause mayhem in the final third with good crosses.

The Norwegian knows all about United and attacking with width, which has been lacking in recent years without a specialist right winger.

Meunier worked with Unai Emery when the Arsenal boss was in charge of PSG, so it is interesting to read that he would be willing to turn down the opportunity to reunite with the Spaniard to join United instead.

Obviously, United are a bigger club than Arsenal and have plans to get back to the top of English football again, even if those days feel a lifetime away. We need players who want to fight for the shirt.

I like the sound of him being a United fan!