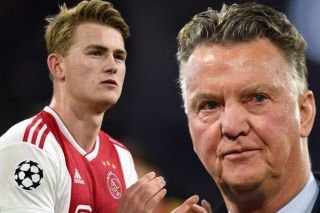 Another Matthijs de Ligt update for you to digest.

This time former Manchester United manager Louis van Gaal has his say on the transfer saga.

Van Gaal, who managed United between 2014-2016, has urged the Ajax skipper to join Manchester City over the Reds.

Speaking to Fox Sports (quoted by Manchester Evening News), Van Gaal stated that he agreed with former Ajax manager Peter Bosz who claimed De LIigt would be a perfect fit for the Premier League.

Van Gaal said: ‘I think exactly the same. Although De Ligt can go to Barcelona too, because I don’t like their central defenders either.

‘He [De Ligt] could play at Barcelona, but he could play for Manchester City also, and in that case I would choose Pep Guardiola over Lionel Messi.’

Van Gaal is clearly still bitter about the way things came to an end at United, and I don’t think anyone can blame him for that. Nobody can deny that he’s a top manager, but the timing wasn’t right.

It is a bit annoying though, to have a former manager of this great club come out with statements like that. But I like honesty, especially from ex-players turned pundits, while others expect them to sing the tune of the club’s best chants.

Paul Scholes was labelled bitter by some during José Mourinho’s reign. You probably didn’t like hearing any of it, but you’ll think differently about it when you ask ‘but is he right?’

Manchester City are winning league titles at the moment, therefore, the Etihad is now an appealing destination for top players, although Van Gaal didn’t have the answers when it mattered most…