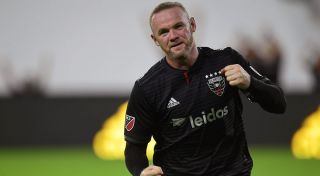 Wayne Rooney says he would love to return to either Manchester United or Everton in a coaching capacity when his contract at DC United runs out.

The 33-year-old has another two years to run down on his current deal but after spending most of his career at Old Trafford, we’re not surprised that he would want to return – or even to Everton, where it all started for United’s all-time top goalscorer.

NEXT: Man Utd to make offer worth £100m to Benfica for young goalscoring sensation Joao Felix

Rooney has already returned to Goodison Park though, for the 2017/18 campaign, and it didn’t really go the plan and led to him moving to the MLS.

“There’s Everton and Manchester United, either of those two would be nice,” Rooney told Eddie Hearn’s No Passion, No Point. “You love your family unconditionally. It’s like that with Everton.

“I’ve got two years after this year and then depending how I feel at the end of it will determine if I keep playing or not. I’ll finish my career here (the US) and then see what offers come up.

“When I finish playing my aim is to go straight into coaching, at whatever level. We’ll see what opportunities come up.”

So it sounds like Wazza will be hanging up the boots in two years.

The former England international had an incredible career. During his time at Old Trafford, Rooney won 5 Premier League titles, an FA Cup, 5 League Cups, the Champions League and Europa League.

Rooney will be able to bring plenty of experience to the table when he’s coaching, and I’ve no doubt his former clubs will be calling him back.