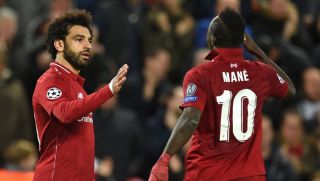 In an interview leading up to tonight’s Champions League final, Liverpool forward Sadio Mane has revealed how close he came to joining Manchester United.

I vaguely recall the media linking us to Mane before his Liverpool transfer and there were mixed reactions among the United fanbase about signing the then Southampton star. As he points out himself in the quotes below, Louis van Gaal was in charge at the time but he also considered a transfer for Roberto Firmino when the Brazilian played for 1899 Hoffenheim.

“Yes, I was really, really close because I even met up with them,” Mane told The Mirror.

“So I was coming, I was there and I spoke with the boss who was there before (Van Gaal).

“They made an offer, but in the same week, Klopp called me. He said: ‘I think it’s the right. The right coach for me, and I think it’s better that I go to Liverpool.’ For me I think it was the right time as well. I said, ‘I am going to Liverpool’.”

Mane probably feels he’s had the last laugh but Liverpool haven’t won anything yet – and manager Jurgen Klopp has openly taken the piss out of his records in finals as opposed to semi-finals, as per The Guardian.

His blistering pace and eye for goal will threaten any idea, but being at the right club and under the right manager is so important. Liverpool are happy with how things are going – even without a league title – and nothing would please me more than to see them fall at the final hurdle again.

The Scousers are favourites to beat Tottenham in the Champions League final later, but hopefully, that means f**k all and they collapse in Madrid as they did a year ago in Kyiv when the brilliance of Gareth Bale sent Liverpool home empty-handed.

It would be better to see Mauricio Pochettino win something.