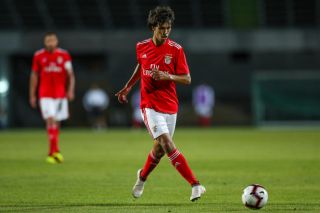 The proposal in question is believed to be worth over £100m and according to Correio da Manha, that meets the value of Felix’s buy-out clause – but not in one go.

United are said to be putting together a deal with an initial fee of £80m with additional clauses which could see the fee rise above £100m.

The report from Correio da Manha adds that United are willing to sell two star players before using the money to reinvest in the 19-year-old. And it represents a massive risk to offer THAT amount money on a young player who has only had his breakthrough season.

However, Benfica president Luis Filipe Viera does not intent to accept such an offer. He will insist on the buy-out clause or happily keep the 19-year-old for another season.

According to Marca, Real Madrid had planned to buy Felix this summer before loaning him back to Benfica for a season, but the Spaniard giants have now stepped up their pursuit to sign Chelsea’s Eden Hazard.

But United are well aware they have competition for Felix’s signature, so they’re trying their best to get the deal over the line this summer, even if they must bend their proposal to convince the Portuguese club to accept.

Felix had an incredible breakthrough season this term, with 13 goals and eight assists in his last 19 games. He is currently away on international duty with Portugal hosting the Nations League finals.