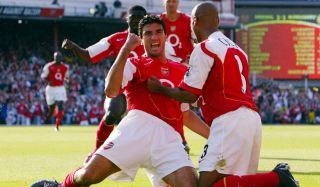 Firstly, our thoughts go out to everyone who knew Jose Antonio Reyes. The first Spanish footballer to win the Premier League. May he rest in peace.

Manchester United were quick to pay their respects on Twitter.

“Sending our deepest sympathies to the loved ones of Jose Antonio Reyes following his tragic passing.

Sending our deepest sympathies to the loved ones of Jose Antonio Reyes, following his tragic passing.

“We couldn’t be confirming worse news,” it read.

We all remember Reyes from his time at Arsenal, a speedy winger who you’d have to mark tight. If he was given space you’d have a running job on your hands all game.

But at 35, Reyes had so much life left in him. It’s terribly upsetting news for the football world to hear about his passing this weekend.

Reyes most recently played for Spanish side Extremadura.

He began his career at Sevilla and came through the academy. The transfer to Arsenal came in 2004, with Arsene Wenger forking out £17m for his signature, as noted by The Express.

“Everyone at Arsenal is devastated by the shocking news that our former player Jose Antonio Reyes has died in a traffic collision in Spain,” it read.

“Our thoughts are with all his family, friends and team-mates.

“Jose, who was part of the Invincibles team, was a hugely popular figure at our club and will always hold a special place in our hearts.

“He represented the club on 110 occasions, scoring 23 times and made memorable contributions to our 49-game unbeaten run.