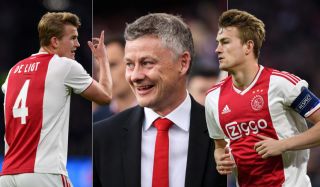 According to the Telegraph, Manchester United can expect a decision from Ajax skipper Matthijs de Ligt in the coming days.

The Reds still hope to beat Barcelona in the race to sign the 19-year-old, but no matter what’s been written it’s the La Liga champions who remain favourites to get his signature.

It’s telling that United are still trying to strike something with De Ligt or his representatives rather than give Barça a free run at the Netherlands. It would be a gigantic coup if we beat them to this deal.

United wouldn’t waste their time trying to sign De Ligt if they genuinely felt his transfer to Camp Nou was a done deal. Why bother?

So yeah, we think there’s a possibility something could happen here, but please contain your excitement. We are at a point that this saga could swing anyway!

An older report from the Telegraph revealed last month that De Ligt was still tempted by a move to United, despite the lack of Champions League football next season.

Moreover, in Holland, many think a move to United is the better option to make the youngster a more complete defender. In England, he would be exposed to a completely different style f football to the one he has experienced in his homeland.

While Barcelona may see De Ligt as the long-term successor to Gerard Pique, United have yet to replace Rio Ferdinand and Nemanja Vidic. Anything but Phil Jones and Chris Smalling at the back!

The latest we heard from De Ligt came from Dutch media (via Metro), when he said the following: “I’m very excited for what could be coming in the near future. But I’m calm too. I see it as a challenge, that’s the most important thing. There are various options, what I’m doing is looking for the best option.”