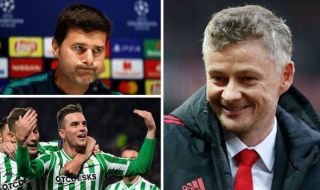 Giovani Lo Celso is definitely on Tottenham’s radar this summer, with Manchester United getting bits of coverage about reported interested in signing the Real Betis playmaker.

Now there are reports to suggest there is one reason why he will snub United for Spurs.

The Express claims Lo Celso would prefer to join Spurs because of his admiration for Mauricio Pochettino, who was heavily linked with the United job following José Mourinho’s sacking in December, as per the Telegraph.

NEXT: Man Utd to decide on £25m transfer next week but Solskjaer doesn’t want Tottenham star

That’s all well and good – plenty of players sign for clubs to work with certain managers, as was definitely the case when Sir Alex Ferguson ran the ship at Old Trafford.

But this might make you think more about future targets and whether working with Ole Gunnar Solskjaer has any pulling power. Right now, he probably doesn’t but that could quickly change.

Look at how United performed when Solskjaer first came in. That was attacking football with tons of excitement, the sort you find technically brilliant players want to be part of.

However, Pochettino has also brought that to Spurs and you can see why a talented player like Lo Celso would like to work with the Argentine.

I’m still unsure how serious United’s interest was at any point. His name just started popping up and never exactly caught fire in the gossip columns unless Spurs were mentioned.