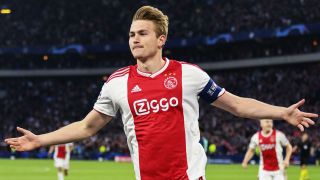 Matthjis de Ligt has hinted that he is set to leave Ajax this summer by saying he is “very excited” for what the future could have in store.

The 19-year-old Ajax skipper is widely expected to move on after a superb season which saw the Dutch giants reach the Champions League semi-finals, only to be beaten by Tottenham.

NEXT: Man Utd hope deal for Portuguese ace could be done next week

“I am very excited for what could be coming in the near future but I’m calm too,” De Ligt said, as per Manchester Evening News.

“I see it as a challenge, that’s the most important thing.

“There are various options, what I’m doing is looking for the best option. It seems logical that one option might be better than another.”

Manager Ole Gunnar Solskjaer needs to strengthen his defence this summer, or else United have no chance of achieving anything next season. For instance, our defence last season was the worst I’ve seen from United to date.

The Reds have been linked with other centre-backs too, such as Toby Alderweireld of Tottenham and Kalidou Koulibaly from Napoli.

There are many options out there capable of improving United’s defence, but it’s a matter of Ed Woodward sticking his hand in the club’s wallet, as well as the manager identifying the right players.

Solskjaer knows he hasn’t got all of the time in the world and that it’s going to be a difficult job.