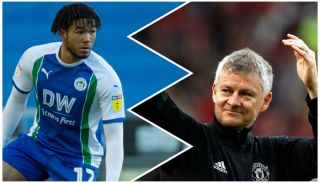 Manchester United are eyeing up a move for Chelsea defender Reece James, according to reports.

The Sun claims United will pursue a move to sign the 19-year-old this summer, although Leicester City are likely to offer competition for his signature.

Reportedly valued at £15m, the talented youngster could be seen as a bargain buy in the future but are Chelsea really in a position to leave a player like this go, never mind to one of their main rivals?

NEXT: Phil Neville warns there is no quick fix to issues at Man Utd

James just spent a season-long loan spell at Championship outfit Wigan and has received lots of praise for his displays all season. He made 43 appearances and helped keep Paul Cook’s side safe with his influence at right-back, which also earned him a place in the Championship Team of the Season.

The transfer ban means they can’t dip into the market to replace players, so the Blues should probably start making use of all the youngsters they send out on loan each year.

They will really struggle to keep hold of Eden Hazard this summer and he will be a massive loss. The question is can they convince the likes of Callum Hudson-Odoi to stay and take the reigns?

It might be too soon for some of these players, including James, but Chelsea won’t ever know if they keep pushing their talented youngsters on loan.

I would welcome James with open arms for a fee of £15m. What’s the worst that could happen?

With Ole Gunnar Solskjaer wanting to sign young homegrown talent this summer, it would make perfect sense to try to get a good deal for James.