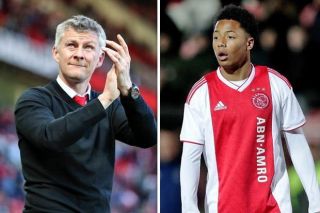 Manchester United are strongly linked with Ajax starlet Dillon Hoogewerf, with The Sun claiming last week that the Reds are set the poach the youngster.

The Dutch giants have quite the reputation for producing amazing young players, so United will be hoping we’re talking about the next Johan Cruyff – rather than Jordi!

So, I wanted to know a bit about Hoogewerf. I can’t write articles on a daily basis about United targeting this player and that player without knowing who they are, but it gets a little difficult with younsgters.

I came across an account on Twitter called @AjaxYA, which focuses on Ajax’s youth teams and asked if they would be interested in contributing a piece on Hoogewerf, providing a profile on the promising striker.

Those behind the account follow the Ajax academy very closely — from the U15s to U21s — and they publish articles on blogging platform Medium.

Sit back and enjoy learning about Hoogewerf, who is reportedly United bound.

Dillon Hoogewerf joined the Ajax academy in 2012. The 16-year-old attacker played most of his games as a striker. This season he also played as a winger and in a number ‘10’ role. Ajax challenges players by giving them other roles than they’re accustomed. Hoogewerf is a striker who can score goals easily. His positioning in front of the goal is good and he is strong in short combinations. His dribbling abilities are good, he has great acceleration and he is two-footed. In the younger teams (U9-U12) he never knew which foot he scored with.

For a striker he is not tall and not that strong physically, which might pose a problem when playing in England, where strength is required. He has to get used to that in the United U18’s. Another weakness is that he tends to let his head hang if things don’t go his way or when the referee calls a foul against him, although he is improving. He can also be a bit selfish during games and watches the ball too often instead of his surroundings.

Hoogewerf started this season in the U17’s, even though he was (only) 15 years old when the season started. He played as a 9, 7 or 10. As we said before, in this way the club is trying to challenge, push or develop talents further on attributes they don’t face that often while playing in their ‘natural’ positions. He played 28 official matches this season. He scored 13 goals and assisted 9 goals in these games. In November 2018 he made his U19 – and UEFA Youth League – debut against AEK U19 (8-1). Hoogewerf payed 7 from his 28 games for the U19’s. The last few weeks he played less because of an injury. Halfway through May, he informed Ajax that he would be leaving the club this summer, which caused him to miss out on Ajax U19’s last matches of the season (title-deciding match and cup final).

Why is he leaving Ajax?

Rumour has it that he is leaving Ajax because of private circumstances. We will not speculate on this too deeply, since that isn’t up to us. Hoogewerf might explain his move one day himself. In addition, he will have the opportunity to develop himself in the academy of one of the biggest clubs in England. This might also improve his physical game.

How are we (Ajax fans) feeling about it?

It’s a pity. It is a beautiful player to see, even if he might sometimes also be a little frustrating to watch. But in general, he’s just a talented player, who in combination with a number of other talents (such as Naci Ünüvar for example) could play very well. He still had to learn a lot to really be one of the top talents, but he was certainly talented. We would have liked to have seen him on a regular basis in Ajax U19 this upcoming season. Nevertheless, it is a great player to watch if he is feeling alright!